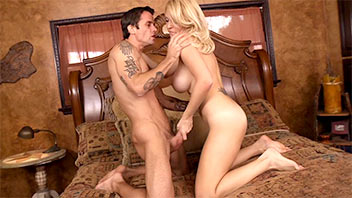 Alan's staying with his friend Billy and his mom Charlee Chase until he can get back up on his feet, and Ms. Chase shows him his room, which needs some cleaning up. She tells him that there's only a bathroom separating his from her bedroom … but she's not worried that he'll see her naked. Soon Alan's heading out to buy an air mattress for his room, but Ms. Chase wants him to rub her neck on her bed first. Neck rubbing turns into tit rubbing, tit rubbing turns into pussy rubbing, pussy rubbing turns into a hot MILF fuck while her son is out with his girlfriend!

10:00
views days ago
Mature woman Jessye fucking with her lover with big cock at home